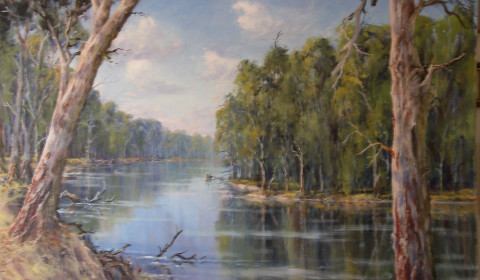 johnbeth_canning@bigpond.com(pleaseseecontactus)
Homepage > Stories past and present

Stories past and present

10/2016   120cmx60cm oil painting of a wedgetail eagle.The idea came after seeing a small statue of a sea eagle at a friends home and appreciating the pose.After some research and from personal observation (which are sadly much fewer),I came up with this result.

Talking with another mate regarding the rarer sighting of other birds in the area,we came up with quite a few but more are seen around the area of his farm property  east of Barooga on the Murray River.He recently sighted a Powerfull Owl,dead.but still hanging onto a powerline by one claw.On the ground below was a Wedgetail Eagle which had also suffered the same fate.Birds of Prey!!!

Tallking to a artist friend ,he said tthat he was doing life class drawings and I recounted my early experience.

As a 16/17 year old country boy, on being shifted to Melbourne in my bank job, I decided to attend night classes at RMIT,Latrabe St, I think, in life and portraiture drawing. On entering this strange studio world, I took up my position a an easel and stood charcoal poised. In came a lady in a dressing gown, she got a chair threw off her gown and sat down . ." Ï cant do this" ,was my first startled thought and was about to bolt for the door. However I looked along the students and there was two Nuns in full habit taking the class. I said to myself," Ïf they can do it,I can." A far world from banking even if a bit nervious to to start with.

This website was built with Webnode
You can also have an impressive website for free!
Try it out